Miniatures the charm of small format 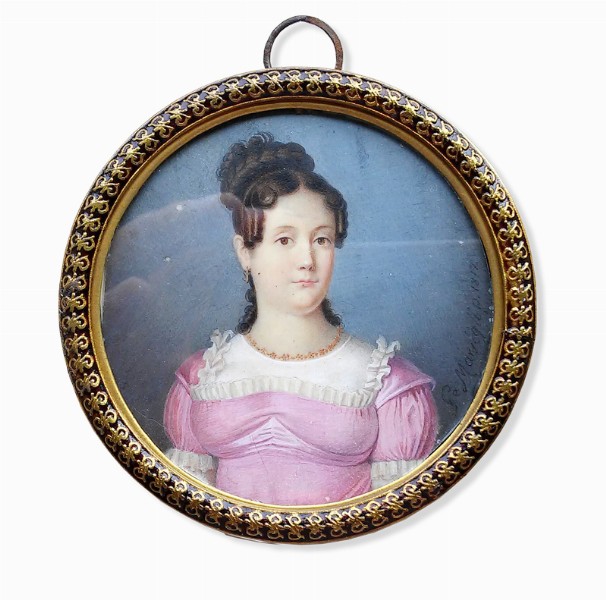 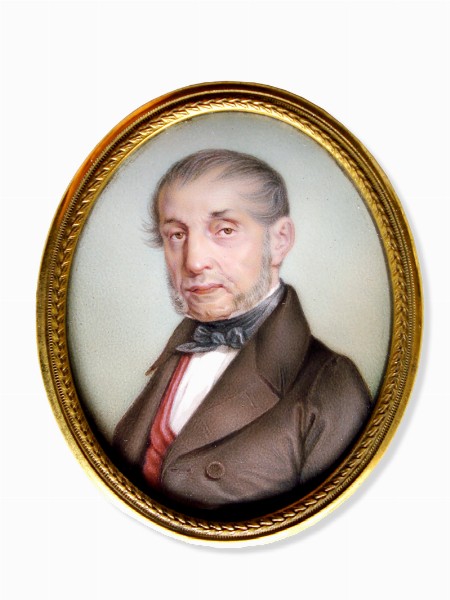 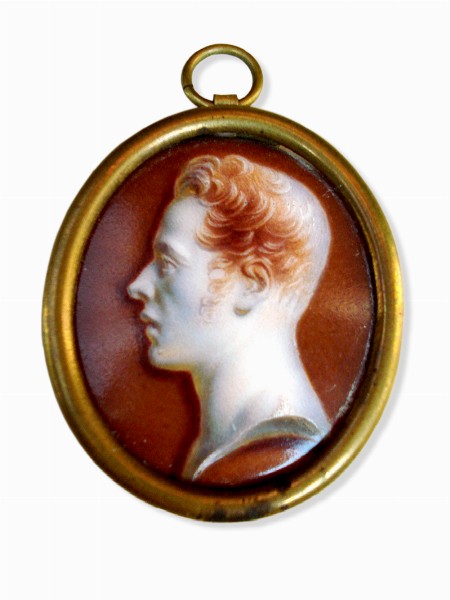 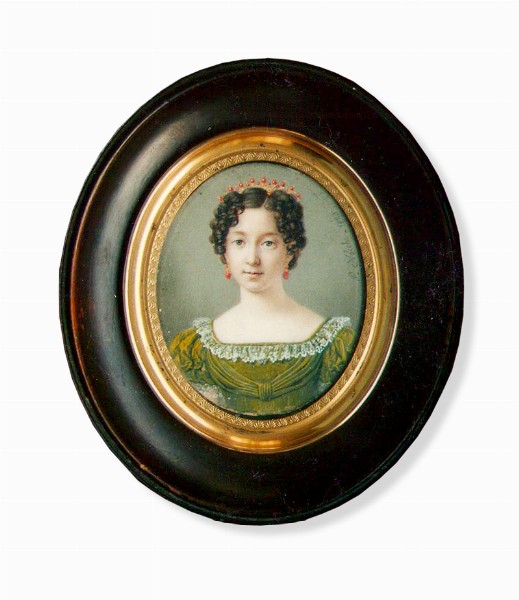 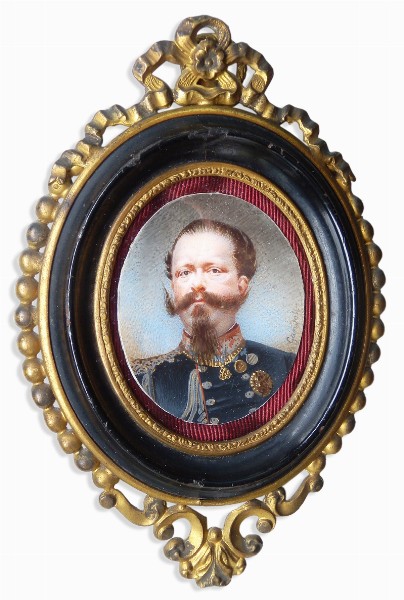 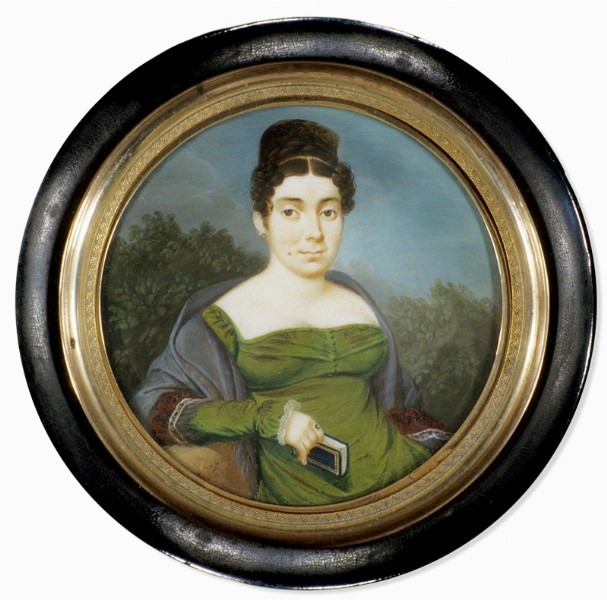 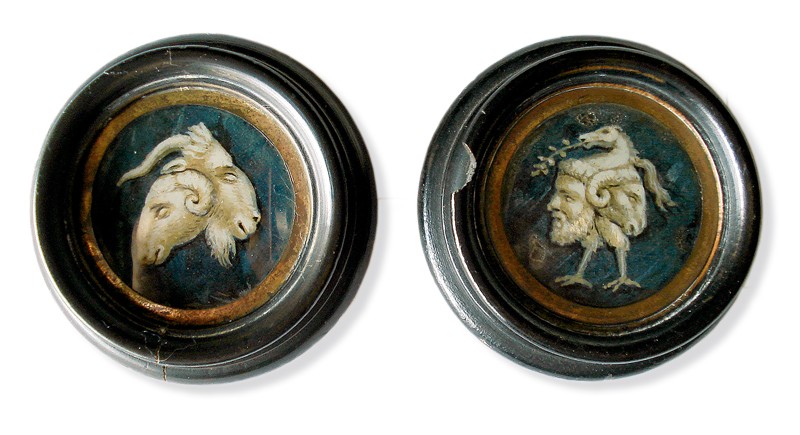 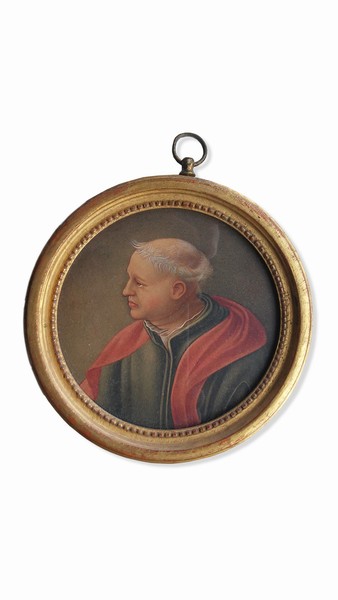 A collection of miniatures of the early 19th century, mostly Italian, will soon be sold at auction in Milan. The variety of types in the collection allows you to fully understand this pictorial production.
A miniature is both a small painting (conventionally less than 20 centimetres) and a technique of watercolour painting and tempera on ivory, parchment (over time replaced by paper, cheaper) or copper. During the Neoclassicism (1775–1825) and the early Romanticism the genre was widely supported and spread throughout Europe; the favourite subject was the portrait (fig. 1). It was performed live, with a series of sessions in studio: since the technique involved a meticulous realization, with brush tip (dots or parallel lines, so thick to blend into an almost homogeneous colour), the carrying out of a miniature required several days of work. Times stretched with the phase of cooking in the case of painting on enamel (fig. 2) – the most rare because of the complex production process that did not always guarantee the result – and on porcelain (fig. 3). The miniature was an elegant but fragile object, sensitive to light and moisture, and to shock in the case of enamel and porcelain.
For the aristocratic society of the late 18th century, to be portrayed was a real fashion, as it became in the following years for the emerging middle class, made up of bankers and financiers, important traders, well-known professionals and senior officials, competing for wealth and prestige. While social and symbolic goals were due to the large format, the miniature played a more intimate, emotional target; the image to preserve was not the official one, but rather the more informal and dear one. Moreover, at a time in which wars and journeys carried men away, it became an indispensable means to carry the memory of the loved one or to leave their own.
The job of the miniature portrait painter was therefore highly sought-after at the time and coveted by the painters themselves because it guaranteed an income. The request for precious portraits, small in size, increased in the late 18th century, especially in the capitals of kingdoms, where the presence of the court attracted the artists. In Milan, home of the Napoleonic court, merged, for example, the most famous painters from all over the North of Italy. Artists devoted to the large format (in which the figure shows life size) did not disdain to apply to the small one: the size made no difference in the quality, stylistic and iconographic coordinates that appear in the painting of large format emerge consistently and often with equal expressive force in miniature. In the collection proposed in the auction, the portraits of Princess Maria Luisa Carlotta of Bourbon by Pietro Nocchi (fig. 4), famous Tuscan artist, and of King Vittorio Emanuele II by Luigi Gandolfi (fig. 5), the court painter of the Savoy, are paradigmatic.
Together with the increase in demand by the market, real “illuminators” were born, specialists from the crafts world, however skilled, who devoted themselves exclusively to the small size: it is the case of Ferdinando Gasparoli, here present with an effective portrait of a Lady with a book in landscape (fig. 6).
It was common to give small portraits as gifts to family and friends; miniatures were worn by men in their pockets, showed as jewellery by women, embedded in bracelets, brooches, rings, necklaces, pendants from the chest or belt. They were set on boxes and snuffboxes, the favourite way for powerful men to make a gift of their own portrait for self-celebration, or framed and hung on the walls. Miniatures contributed to carry lavish social rituals that accompany the stages of life, such as weddings and births.
With the advent of photography, at the end of the fourth decade of the 19th century, miniature on ivory started to decline rapidly; long it survived among the noble amateurs, tied to a traditional medium. Even the paintings on paper became more rare, replaced by the technique of oil painting on canvas, much more resistant.
But back to the subject depicted in miniature, besides the portrait, gods and mythological creatures (fig. 7) were frequently represented, in an age of rediscovery of classical antiquity.
The so-called miniature d’après reproduced instead small-scale famous Renaissance (fig. 8) and Baroque paintings of large format, but also contemporary. Striking is the portable art gallery (now in the Galleria d’Arte Moderna in Milan) of Count Giovanni Battista Sommariva (1760–1826), one of the greatest collectors of fine arts of the 19th century. The great patron had reproduced in miniature on enamel his amazing collection of the most famous contemporary Italian and French artists, housed in the villa of Tremezzo, on the Lake of Como (now Villa Carlotta), in order to be able to carry it in his travels: he wanted to keep enjoying the beauty of his treasures, to be shared, at the same time, with fans and lovers.
In 1908 it was held in Milan, at the Society for Fine Arts and Permanent Exhibition, a memorable “Miniatures and Fans Exhibition”, that presented the most beautiful objects housed in the aristocratic and upper class houses. Since then, the miniatures that survived time – also because of the small size that allows easy storage – have become valuable collectibles. Today miniatures in private collections come alongside those donated to prestigious European (such as the Poldi Pezzoli Museum and the Pinacoteca Ambrosiana in Milan, the Louvre in Paris, the Wallace and the Gilbert Collection in London, and many others) and American institutions (one for all, the Metropolitan Museum of Art in New York). They are jealously preserved for the enjoyment of those who have them or those who merely admire them from the windows of a museum.