Castello Mackenzie was built between 1893 and 1905 by the young and unknown (at that time) Florence architect Gino Coppedè on commission of the Scottish insurer Evan Mackenzie.

Defined as a “king’s whim”, considered as one of the major examples of the revivalist taste of the end of the 19th century and planned, at the beginning, as a villa with a tower, it took its current connotation as an answer to the continuous solicitations and variations asked by the purchaser to the architect. The castle was inhabited by the Mackenzie family for 27 years. Four years after Evan’s death, in 1935, her daughter Isa sold it to a real estate company. During World War II, it was occupied by the German Army and then by the Allies, while in the 1950s it became the headquarters of the Carabineers Army. In 1956, it was declared national monument, recognition to the famous Coppedé style.
After the moving out of the Carabineers, in the 1960s and 1970s, it became the headquarters of various activities and of a gymnastics association. In this period its degradation increased with tempering of its original structures and theft of the furnishing. In 1986, the castle was purchased by the American patron Mitchell Wolfson Jr. to host his collection of 20th century objects and art works and to open it as a museum. In 1995, after the restoration of the exteriors, the restructuring was suspended. In June 2002, the structure was purchased by the Auction House Cambi. Despite its Renaissance aspect, the techniques used to build the castle are to be considered in the van for the period of its building. In fact, it was provided with central heating, hot and fresh water in all bathrooms, a covered heated pool with sauna and a lift for up to 25 people. One of the main materials used to build it was iron, both as decorative and strengthening material, but the indiscriminate use of such material caused serious problems to the stones because of the rust developed during the years. Built on a pre-existing villa, whose remains are still visible within the walls, Coppedé added, to the original structure, beams and tiles, La Spezia sandstone, with towers, niches, jutted stairs and battlements with continuous citation to Tuscan Renaissance such as ceramics in the Della Robbia style, plaques, coats of arms, plumb line windows, citations of the Mangia Palace, Palazzo Vecchio and the Dome of Pisa with a copy of the lamp called “di Galileo”. While building the castle, the works of the Coppedé family workshop had great importance as for the boiseries and the numerous coffered ceiling in the 16th century style. 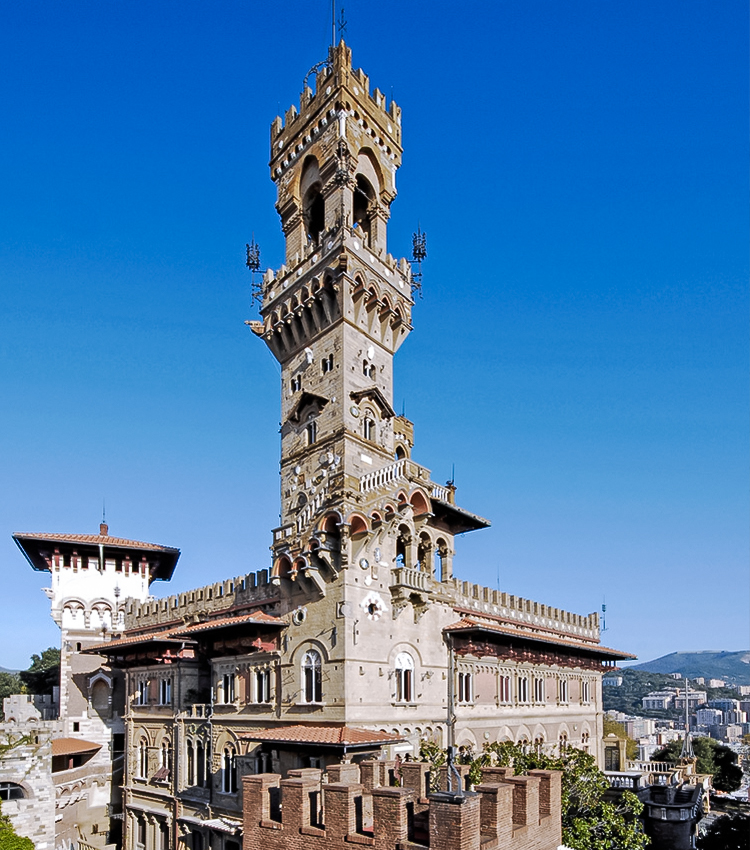 The most interesting rooms are the honour entrance-hall, accessible from via Cabella, the library and the Chapel, on the first floor in an external room. The entrance-hall is, with no doubt, the most articulated room of the castle where, in a single solution, the architect built the actual entrance-hall and the stairs to the first floor.

The furnishing is formed by a copy of Venus statue, a giant fireplace, high gates in wrought iron separating the entrance-hall from the internal courtyards of the castle and a marble throne. On the walls it is possible to admire the rests of the historical wash drawings by Carlo Coppedè, representing the Mackenzie family. The library, on two floors linked by a wooden winding staircase, hosted the wide Mackenzie collection, but not the precious Dante collection, formed by more than 1000 volumes of the masterpiece with rare editions of the 15th and 16th century and donated by the daughter to the city of Genoa after the death of her father (and now preserved at Berio library), originally preserved in the Dante room in the tower. 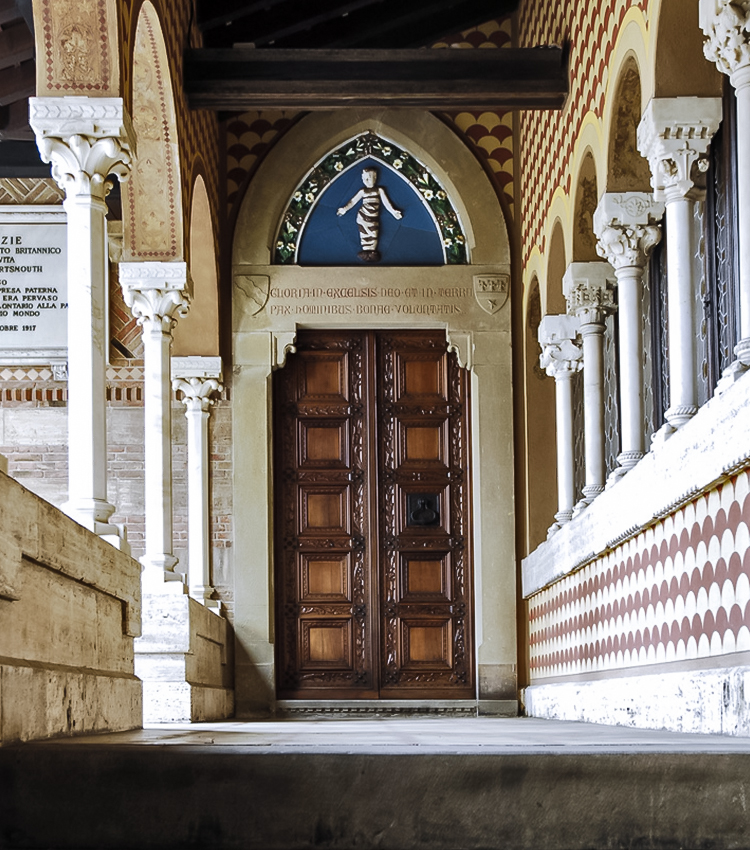 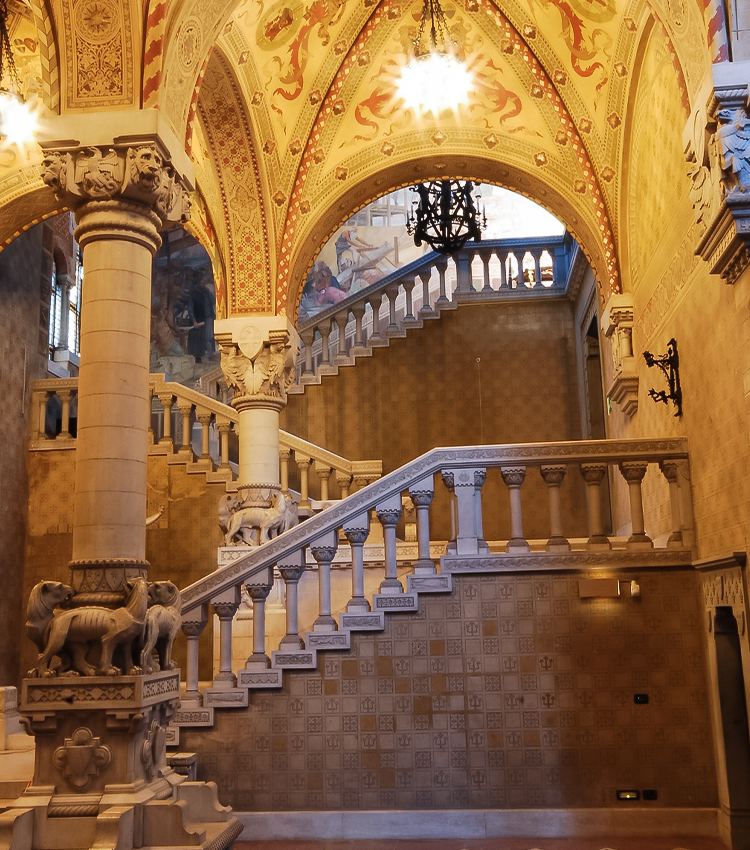 The Chapel, in gothic style, hosts some of the most beautiful works by Castello such as the pipe organ, two copies from Beato Angelico (Annunciation and Resurrection), wooden seats manufactured by Coppedè’s family “La Casa Artistica” and windows in the Della Robbia style.

In this Chapel, mess was served for particular events and here, the archbishop of monsignor Minoretti, celebrated the wedding of one of Mackenzie’s nieces. Divided on four floors plus the foundations and the grottoes, the castle has 85 rooms, a surface of 4000 square metres and a volume of 16000 cubic metres. 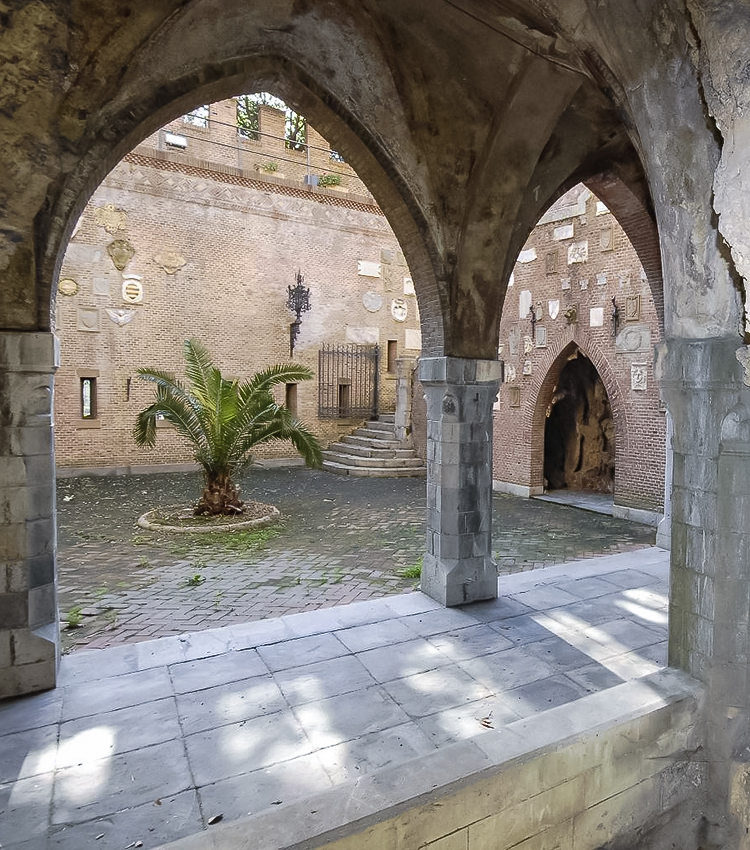